Forecast Updated Tue 8:27 AM — Periods of light intermittent snow should continue to affect us through this evening.  Additional accumulations should be a coating to 6 inches (see graphic below).

Here’s an interesting FYI tidbit—  Each model run’s “snow depth parameter” starts at time zero and has shows an “initialization analysis” amount at the start of the model run.

So all subsequent snow total depth maps for the HRRR (e.g., the  snow total at noon) are going to be high by about 7 inches!  All the models do the it the same way.   For a long snow event like this one, the snow depth parameter becomes increasingly off by the an increasing error of the previous model run’s error.

That’s why I had to do a “back of the envelope” calculation for incremental increases in snow totals yesterday.

The other way that snow totals are calculated is using the the “accumulated precipitation water” over a set period of time and multiplying it by a factor of 8-15 depending upon the temperature and expected snow density/compaction.   So if 0.15 inches water is expected to fall between 7 AM and 12 noon, about 1.5 additional inches of snow is expected if the ratio is 1:10.  Determining the ratio is an art/science in itself and the technique’s mathematics is often named for the researcher who created it.

The point is, without correct actual snow measurements going into the model at time zero, the snow depth parameter becomes increasingly wrong with long snow events and even worse with mixed precip events.

Using the above accumulated precip technique with the latest NAM model, assuming 1:10 ratio,  the forecast is 1-6 additional inches of snow today depending upon location.

Forecast Updated Mon 8:40 PM —  This has been a difficult forecast and it’s appearing that my “additional snow forecast” from late this afternoon is already very wrong!

Extremely heavy snow banding and snow accumulation has set up just north of the Philadelphia area. (Areas in violet – Maple Glen, Montgomeryville, Schwenksville – have been getting over 4″ of snow per hour!)

Meanwhile, some ‘dry-slotting’ has been moving into West Chester and Malvern and snow has ended there at least for now.

Even the GFS and ECMWF models with its high snow totals didn’t predict correctly, nor did they get the placement correct.

I’ve gone from thinking that the graupel/sleet was eroding final snow accumulation to now thinking we’ll have way more than previously forecast.

I don’t know what to say.   Who got this one right?

Sorry for the multiple repeat Twitter postings this afternoon.  I had a wrong setting on a WordPress plugin.

Forecast Updated Mon 4:36 PM — So far, the snow totals have been not been as high as forecast due to as-yet unexplained extended period of sleet and graupel in the Philadelphia area.   The Model Blend showed a mix, but still maintained fairly high snow totals.  In retrospect, perhaps the only model that really got it very close in my neck of the woods (and pretty much ignored by me) was the NAM-NEST.

So, doing a back of the envelope calculation based on the latest NAM-NEST, here are the additional snow accumulations (from about now) expected by Tuesday morning superimposed on the total snowfall depth coloration predicted by the NAM-NEST model—

Whatever snow you have at 4-5 PM today, add the above.

The latest GFS has come out.  If you’re a GFS model fan, just add about 1 inch more to above incremental amounts.

Forecast Updated Mon 1:18 PM —There’s no question that the models (and most radars) are incorrectly identifying ice pellets, sleet and “graupel” as snow. Indeed graupel is snow with super-chilled water condensed on it.

None of the models are picking this up, but it suggests that the snow depth totals are going to be highly overdone by Tuesday morning if this continues.  (Yesterday’s NAM low snow estimates are looking better and better.)

I wish this forecast was more straightforward. 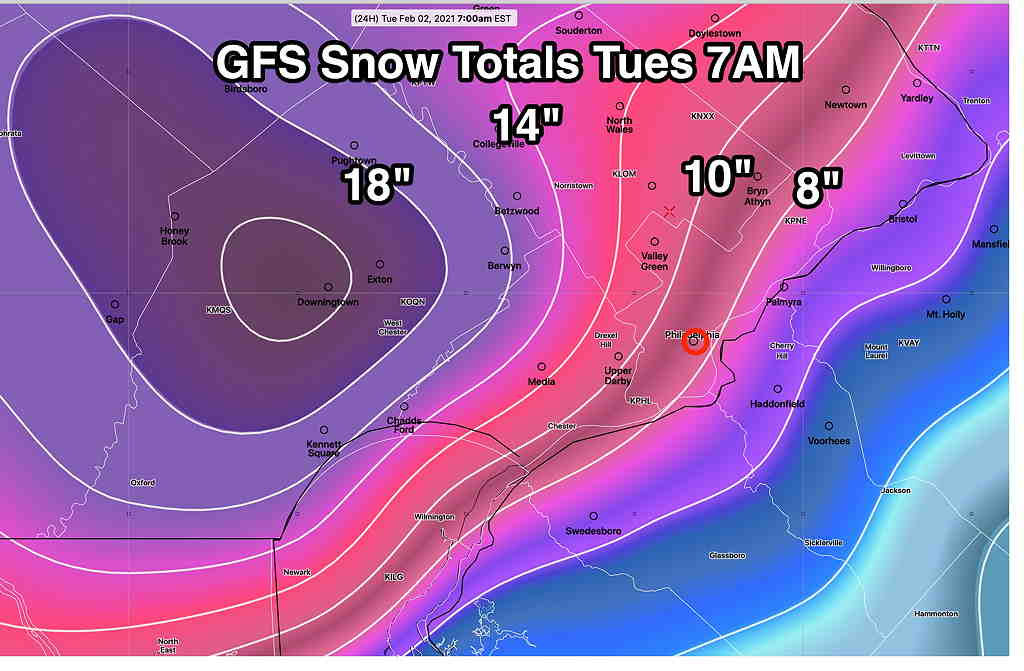 Forecast Updated Mon 10:21 AM — Latest HIRESW model has snow through much of Tuesday.  Low pressure remains off Jersey shore and is blocked from moving away!

Forecast Updated Mon 9:13 AM —The latest NAM and HRRR have become available. The graphics and the info have gotten too thick so I’m going to distill the rest out and keep it simple.

from earlier this morning…

As [more] correctly predicted by the NAM model, a substantial area of our region has changed over to a mix of sleet, rain and snow, limiting the accumulations this morning and compacting down the snow that has already fallen.

Here is current radar in “hybrid hydrometeor classification mode” showing that most precip has changed to rain and sleet right now (7:45AM)—

The storm so far has been the first of a double system.  This has been the warm front type snowfall.  The coastal low still remains to affect us.

I think this morning’s models will better capture the snow totals for this second system, which is expected to start affecting our region late morning today.  Those models will start becoming available between 9AM and 11 AM.   I’ll update later this morning.