Fri 10 PM Update – No significant changes. I want to emphasize the winds both Saturday and Sunday will be 15-20 mph with gusts.

A strong southwesterly flow of warm air ahead of an approaching cold front will bring the unseasonably mild air.   But it won’t be a blue-sky day.  With the warmth will be considerable cloudiness and some uncertainty about the amount and timing of sunshine (if any).  It will be somewhat windy.

For Saturday, depending upon the model, we have sunny skies in the morning, becoming cloudy (NAM)

or clouds early breaking for sunny skies by noon (HIRESW-ARW) then cloudy later,

or mostly cloudy all day (GFS)!

For good measure, the NAM-NEST has some widely scattered showers in the morning (not supported by the other models).

So the warmth is a certainty, the cloud cover less so.   I’m leaning toward the HIRES-ARW with clouds breaking for some sun mid-day, then clouds return.—

The cold front moves through Saturday night.  There may be a spotty shower early evening, then heavier rain after midnight.

For Sunday, all models have the front moving through about 7 AM with clearing afterwards.   Mostly sunny skies but windy.  High temps near 70, but that will be late morning.   Temperatures slowly fall during the afternoon.

I don’t expect any changes, but I’ll do an update later if there are,  based on the new model runs. 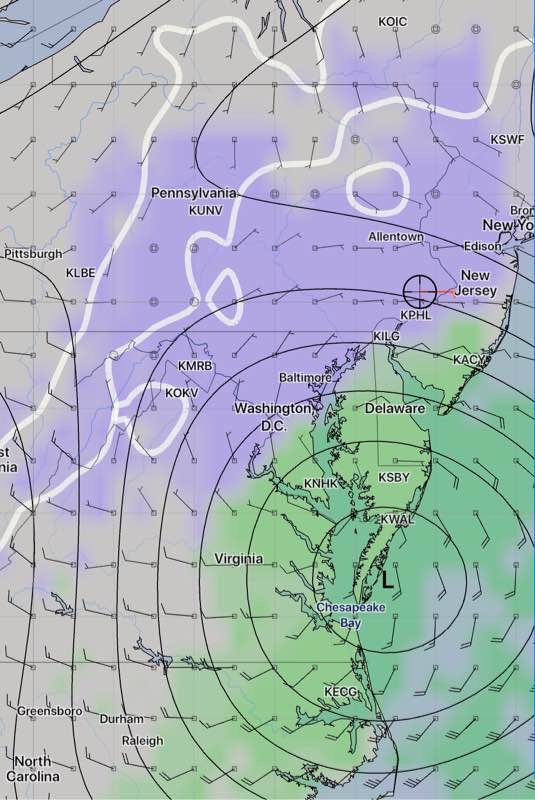 Yesterday’s cloud base did lift and thin, but we never saw the degree of clearing that was forecast by the HRRR or NAM-NEST models. Showers moved in, as expected, about 5 PM, but the northern-most extent and their duration into the evening hours was greater than predicted by any model.

For today, (similar to last Sunday), several upper air disturbances are causing the cloud deck right now.  Sun should break out later this morning, but another upper air disturbance is expected about 4 PM (not talking about the Eagles here.)  So, another period of cloudiness possible later.

The coastal storm for mid-week mentioned in last Friday’s post remains difficult to forecast.  The NAM and Canadian GDPS have 1-2 inches of snow (less in the city) late Tuesday afternoon into evening.  The GFS shows less development and a coating at most. The GFS has done the best this season with these storms.  This storm is still beyond the range of the shorter range models.  Stay tuned.