Here are estimated snow totals based on MRMS data (11:1 snow water ratio) as of 11 AM—

Of interest is the water vapor image which shows a possible low pressure center developing near the coast of NJ in response to the upper low passing through.

This will likely provide some late enhancement of snow towards its final taper.

Update Fri @ 10:13 PM — Tonight’s models are fairly consistent with the afternoon runs. Several models have moved a bit lower with snow totals (specifically the NAM, Canadian GEM and ICON) and some have moved higher (RAP, HRRR)

The current developing storm is fairly consist with the models, based on the latest water vapor imagery—

Again, I’m going to lean on the NBM model (model blend) which is designed to do all the hard work of coming up with a composite snow total.

My present inclination, based on the NAM trend, is to lean towards the lower range number in the NBM from Philadelphia and westward.

Update Fri @ 5:25 PM — Today’s snowfall was more widespread and lasted longer than previously forecast. Does that bode well for the rest of the forecast?

The afternoon models have become available. Both the GFS and NAM are in a similar range as this morning, but with a trend downward of about 0.5″-1′ overall in Philadelphia and surrounding areas. That can simply be model variation. Snow totals are posted below.

I did notice that the water vapor image and the GFS/NAM model vorticity do not superimpose very well, suggesting some modeling error. I guess we’ll find out.

Snow starts this evening and lasts through the morning in the Philadelphia area. Ends by noon or so. Longer at the shore.

This afternoon’s high resolution HRRR has this forecast—

I’m probably going to stay with this forecast. This evening’s models run the risk of not necessarily being more accurate due to lack of adequate model spin-up time. But I will chime in if there are major changes.

Update Fri @ 11:02 AM — The latest GFS just became available. As is almost always the case, its totals are somewhat less than the NAM—

My rule of thumb is to average the GFS and NAM for a best forecast.

Update Fri @ 10:06 AM — FYI, the light snow this morning was predicted yesterday, although the amounts appear to be more than forecast.

The new 12z models are beginning to come in. (The 12z models, along with the 00z models, are important because they are the two daily model runs that include fresh direct measurement upper air data from weather balloons launched globally.)

The trend is for an increase in snowfall with snow lingering into noontime Saturday in Philadelphia and later at the NJ shore.

Things seem to be coming together, based on the latest Water Vapor image and superimposed NAM/GFS potential vorticity (see explanation below)—

Update Thu @ 9:55 PM — One way of deciding if the models are on the right track is to see how their forecasts, in the short term, line up with actual observed conditions.

Here’s tonight’s recent water vapor image with superimposed potential vorticity from this afternoon’s NAM and GFS forecasts. It looks pretty good, but there are some areas that are a bit off, designated as “?” below—

Tonight’s models are becoming available. The general trend has been an increase in snow totals.

I think the NAM might be a tad too high. (Tonight’s NAM-NEST is an inch or two below these amounts.) Ultimately I think we’re going to go with an average of the GFS and NAM.

The GFS is out about 11:05 PM. I may not be able to update until tomorrow morning.

The storm late Friday through Saturday time frame has entered into the range of the high resolution models.

Our weather Friday through Saturday will be influenced by a sharp upper air trough and a deep storm developing in the western Atlantic.

Everyone knows that there has been much uncertainty regarding the track and snow potential here around Philadelphia. The models have been back and forth regarding position of the storm and the size of the precipitation shield westward.

Here’s a summary (you’ll only find this here!)

Regular readers know my motto, “Never Ignore the NAM”. And it’s time not to ignore it.

I am going with an average of the NAM and GFS models at this time as the most likely snow totals.

With the high resolution models coming into the mix, here’s the forecast:

An upper air disturbance and cold front will move through. We’ll have light snow break out northwest of the city as early as late morning Friday. Light snow/flurries on and off, mostly north and west of the city. Accumulation a dusting to 1/2 inch. High 34º sd 1.7º NBM model Blue Bell.

Most of our snow with this storm will occur Friday night into early Saturday morning.

Cloudy, cold and WINDY. Snow tapering and ending in the morning but lingering at the NJ shore. High 23.2 sd 2.9º NBM model Blue Bell

I’ll try to make sense of these giant differences later this afternoon. Right now I’m inclined to go with the GFS, but that could change.

Update Thu @ 10:17 AM — This morning’s early models are becoming available and their higher resolution forecast ranges are taking us to 1 PM or 7PM Saturday timeframe.

The dichotomy between the NAM and GFS still exists. Here’s the very latest NAM snow forecast—

Despite the new NAM forecast, the other new models entering into the picture this morning are tending towards the much lower snow totals of the GFS. (about 1 inch in Philadelphia and less west)

The new GFS comes out just after 11 AM. I’ll take a look and update. Stay tuned.

Update Thu @ 8:43 AM — A quick update with last night’s 00z and 06z model trends. The GFS remains as the eastern outlier with the NAM back with a significant snowfall. European ECMWF still shows 4-6″.

Mon 08:32 PM Forecast Review —We had more snow than forecast.  The models (with the exception of the Canadian GEM model) underestimated the QPF and didn’t fully take into account the cold upper level atmospheric temperatures, which resulted in more snow and less rain. The NAM erroneously hastened the transition to rain, despite having the QPF somewhat in-range.

The Canadian “Regional GEM” model is one model I always look at, but it it isn’t necessarily a model that is more often accurate.  I’ve seen it over-estimate snow totals many times.   Last night’s GEM had these higher snow totals, but as I said, “Not sure what to make of it” 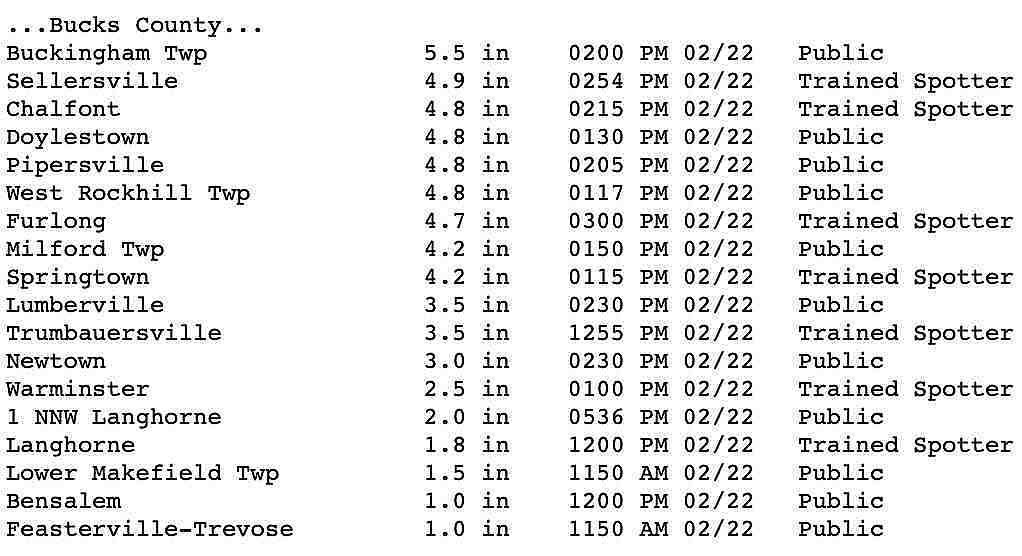 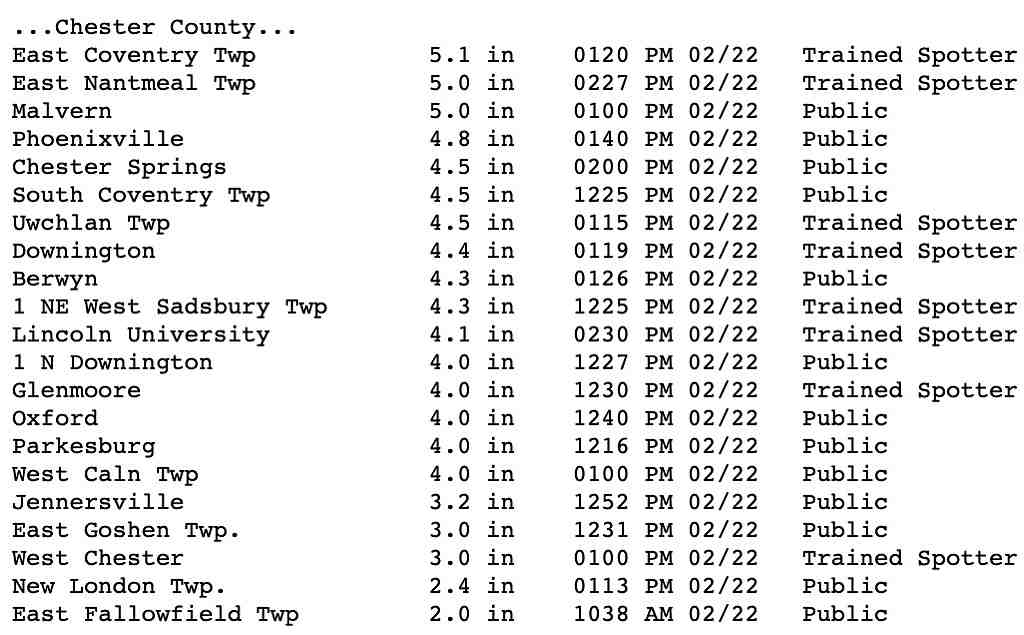 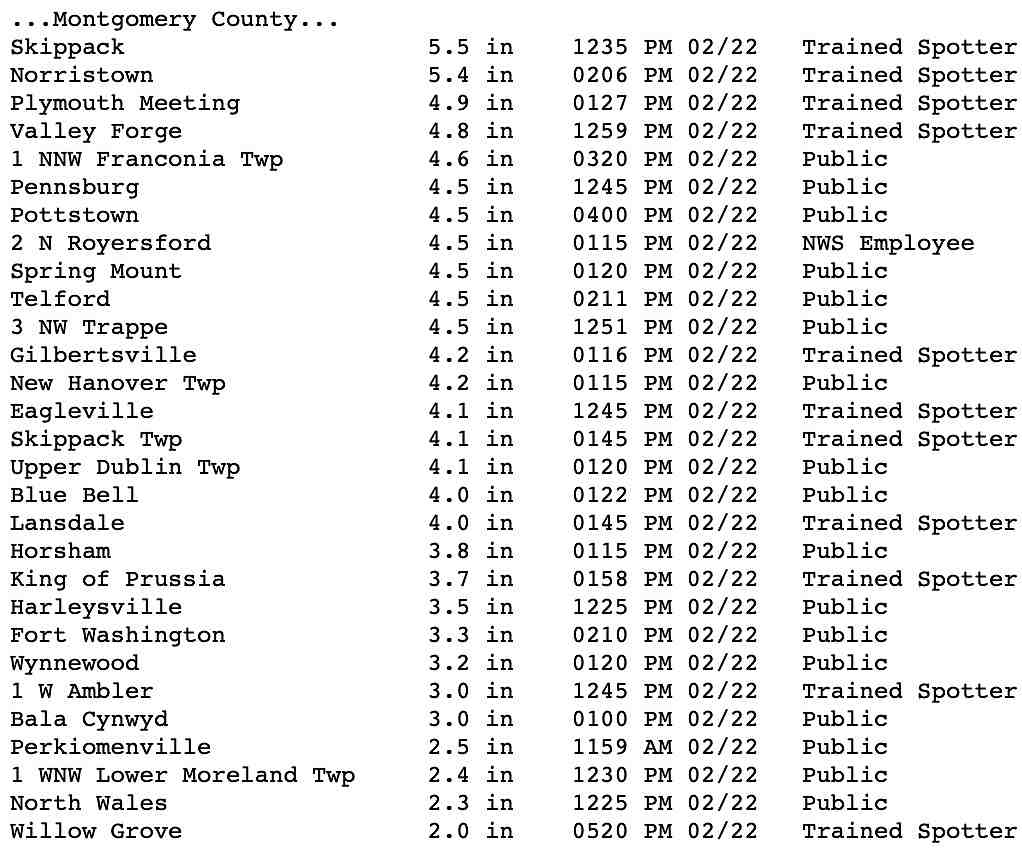 Here’s the graphic posted yesterday afternoon from the GEM model—

Tonight’s latest models (HRRR, RAP, NAM)  shows the following changes— snow changeover a bit delayed northwest of the city, although snow totals are pretty much the same.  (It might be snowing an hour longer, but it will be increasingly difficult for accumulating snow.)

Snow starts about 9-11 AM from west to east and changes to rain from southeast to northwest by 2 PM.    Precip ends 3-4 PM.

The differences with this storm and recent previous storms  were outlined in an earlier post:

Things can be summarized with this graphic slide show:

Forecast Updated Sun 5:36 PM — This afternoon’s NAM has backed off on some of the precip and I think the earlier RAP model’s higher snow totals are too high. Either way, lower snow accumulations are expected on roads and dark asphalt. While the NAM still has about 0.4-0.5 water (QPF) falling, temperatures are above freezing by noon. It’s going to tough to accumulate much snow on paved surfaces.

This is a fast moving disturbance. Precip starts 9-11 AM and tapers off around 3 PM. Any snow comes as a heavy slug early.

This afternoon’s (18z) HRRR is very similar to its model run earlier this morning, so here’s the same graphic posted earlier, which are the likely snow totals for Monday—

Forecast Updated Sun 12:13 PM — This morning’s models have become available.  Here are the trends:  the QPF has increased with the NAM and RAP models have total water equivalents as high as 0.6″ water.

The temperatures at the surface continue to be at or above freezing, but the upper atmosphere maintains its cold, allowing precip to fall as snow in areas north of the west and north.  Precip still starts 9-10 AM and tapers off around 3 PM.

Monday’s wintry weather is almost within a 24 hour range and it’s worth trying to take a stab at the snow totals.

As mentioned in my previous update, the trend has been for the precipitation to start from west to east about 9:00-11 AM Monday.

This storm will be vastly different from the several previous  storms—

Whatever starts as snow will mix with or change to rain,  as depicted by this graphic with snow totals, especially in the green shading and south of the magenta line—

The latest HRRR shows these snow totals before a mix and change to rain in most areas.  This only shows snow totals.   (Much of the area will eventually become mostly rain, as depicted in the SREF above) —

The Model Blend (NBM) is similar to the above forecast, as is the German ICON model.

I’ll update this evening with the latest models.