Snow will be ending from west to east shortly.

Well, I’m glad I had emphasized last night that all the major model’s built-in snow algorithms had predicted only 0.35 to 0.50 inches of snow and they didn’t support my old technique and the 1.5 to 2.0 inches which I had thought possible.

Indeed, this morning,  the NAM QPF amounts look to be over-done, based on radar. (Perhaps this is why the NCEP has recently decided to stop further development efforts of the NAM.)

Looking back several days, the ‘new’ GFS probably did the best in advance, the Canadian not so good.  I had not mentioned the new NBM (National Blend of Models)  in my posts, but looking back, it also did well with the snow forecast in advance.

The computer modeling of this storm had many aspects go wrong…

With this storm, it’s not that one model did better than another. The GFS, NAM and NBM (the NBM is a composite of many models, including the European, Canadian, GFS, NAM, their statistical analogs, and the HRRR) all got it wrong.

Flash freeze?   I don’t think so.  “Flash Freeze” warnings became its own TV weather reality show when it was realized that this was going to be just a rain storm.  Originally based on model runs from early Thursday and predicated on a originally predicted temperature drop from about 49 to 32 in just a few hours, current short range models now show an unremarkable drop in temperatures during the afternoon today.  But the Flash Freeze likelihood has been dispelled by the model runs for two days.

The models are still showing high winds (likely) and a cold snap for later this afternoon and tonight.

[su_note note_color=”#d9f2da”]Current temperatures are running warmer than even this morning’s models. It’s 43 northwest of the city at 11 AM, but the NAM run from this morning predicted 36.

The NBM is looking the best right now- temperature drops to 32 about 3-4 PM and 5 degrees by Monday morning.[/su_note]

With high certainty today, I had made a forecast for an immediate switch to sleet and rain.  I blew it.   I feel I have an obligation to explain why the forecast went wrong today.

I’m going to get technical but I’m also going to share some of my secrets for winter weather forecasts in Philadelphia.  (It’s the least I can do to make up for the forecast error!)

First, I prefer the NAM model for precipitation type. I use that model almost exclusively for snow storms but also use the GFS for QPF and other things.

With the NAM, there is something called FOUS data (Forecast Output Statistics).  It’s a form of  tabular data that’s been available for years, even when the NAM was previously called the ETA.

The FOUS data allows a quick and incredibly powerful way of looking at a forecast for a single area, six hours at a time.

Here’s the FOUS data from this morning’s NAM model run for PHL. (I’ll explain the boxed in numbers in a moment)  — 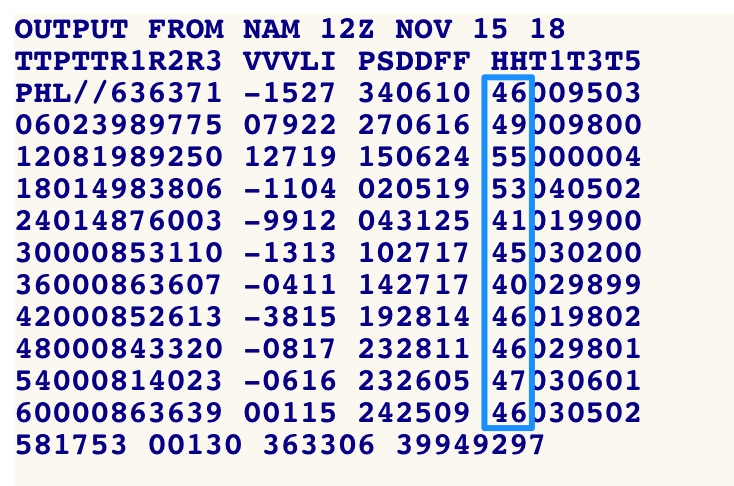 The data is tabular and somewhat coded to allow different data to be shown using two digits in each column.  The rows are 06-60 are six hour increments, starting here at 12Z (7 AM EST.)

In Philadelphia, at or near sea level, the critical 500 mb thickness  (rain vs snow) (which relates to density and ultimately temperature) is 5400 decimeters.

I rarely see any exceptions to this, although it did cause a forecast error last season:  We had snow last season, (4 inches) even though the FOUS thickness was 5420 (42)-

So, what happened today?

These temperature numbers are also ‘coded’.  Here, 98 means -2 degrees celsius. So, you can see that the NAM forecast shows the lower levels at or below freezing until sometime late afternoon, (when the last number goes to 04).

[su_note note_color=”#d9f2da”]So the reason for the poor forecast- with the 500 mb thickness at 46-49, I thought it was a straight-forward forecast of too warm to snow today. (Or to use a common expression, “too big to fail”. LOL).

It works most of the time, but not today. Today, the temperatures in the lower atmosphere called the shots. [/su_note]

I’ve shared how I approach the last grouping of numbers which is a summarized way of viewing the 3D temperature profile- thickness and temperatures and precipitation type.

As I write this note (1:45 PM) , the snow is changing to rain!  I knew it was going to happen eventually.

I guess the NBM is doing well!