Sun 10:09 AM Update — Sharp cut off in the radar suggests the light flurries falling now may be all that we get.

Tonight’s models seem to have clarified the forecast for Sunday. Light snow or flurries Sunday morning through about noontime, then light rain showers before ending early afternoon. The changeover to rain will occur earlier in Philadephia and south.

Total QPF ranges from 0.06 to 0.09 inches water, which translates into as much as a coating to 1/2 inch of snow in some areas as show below—

Thu 01:36 PM Update —Forecast Review: Looking over the official snow totals for this past snowstorm, most models underestimated the snow totals during the early part of the storm; the gradient predicted of increasing snow north and west was either over-done or underdone.

While I had prematurely slammed the NAM for its incorrect built-in snow depth algorithms, it successfully predicted the changeover to sleet and rain about 6 PM in the city. As far as the “precipitation type” or what’s called “PTYPE”, the NAM and NAM-NEST did well.

As for snow totals, I’m not sure which model I would pick if we had to do this again. Last night’s GFS over-predicted the additional snow total after midnight.

Here are some of the official snow totals— 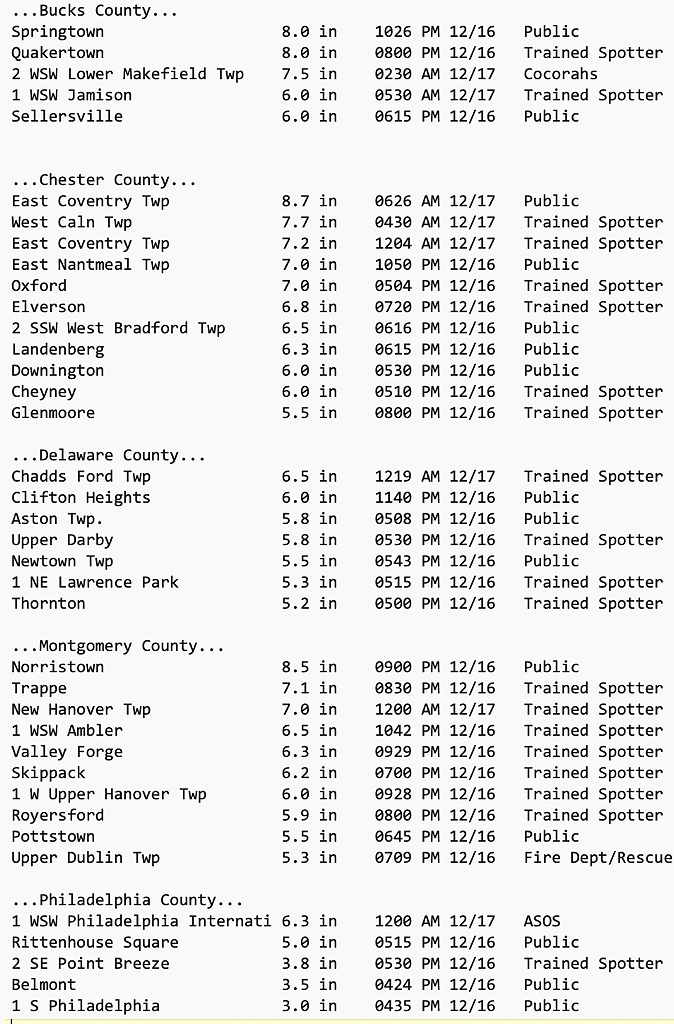 I thought I might want to wait for the GFS data to become available to make a call on additional snow tonight, but there’s enough agreement with the available 00z models tonight to make that call now.

It appears that the sleet, freezing rain and rain will continue and change back to snow. Some of that precipitation will compact down existing snow from this afternoon.

However, the new models (HRRR, RAP, NAM, NAM-NEST, HIRESW NBM) show at most, about 1/2 inch to under 2 inches additional accumulation in the PHL area and the immediate surrounding north and western suburb.

Below is the snow depth meteogram for Blue Bell, which pretty much captures the trend for additional snow and compaction for the region tonight (and it’s just a bit high already.)

Snow ends before 7 AM with perhaps some scattered snow showers in the morning. Cold and windy. A frozen tundra!

So, I’m wrong about my previous revised forecast. I’m waiting for the changeover to sleet to happen and we’ve already exceeded the snow total I had forecast. It’s clearly not happening as predicted by the NAM and NAM-NEST.

I decided to look at the latest HRRR and the NBM, which I had banked on last night and then abandoned in deference to the NAM this morning.

The HRRR shows the changeover from snow to sleet occurring at 9 PM but a switch back to snow after midnight. The HRRR cranks out a much more impressive snow amounts—

So we’re back to 3-6 inches snow for Philadelphia and immediate western suburbs. I’ve learned something. That’s what makes this so interesting. The NAM isn’t going to cut it going forward (I guess there’s a reason that NOAA has abandoned development since 2018.)

Hopefully, there won’t be further upgrades in the snow totals. Maybe I have to come up with a new blog category, “Mea Culpa”?

Despite the impressive snow falling at 3 PM, the revised forecast of only 1-2 () inches in the Philadelphia area and immediate northern and western suburbs remains on-track from this morning’s update.

Based on radar, the changeover has just moved north of the Delaware-PA state border.

The high winds (50-60 mph) are still expected this evening and night-time hours.

The latest NAM and NAM-NEST continue to show warm air entering the region at 6000 feet (800 mb) with a change to sleet, freezing rain and rain in the 6  – 8 PM timeframe.  The higher resolution NAM-NEST shows a possible alternation of precipitation types during the evening hours, especially far north of the city.  A changeover to back to snow will occur 2- 5 AM depending upon location.  The snow will gradually taper during the morning hours.