My previous post included the link for the official snow totals. I always like to evaluate my forecast to improve on future forecasts.

For the immediate PHL area, snowfall was between 7-11 inches and areas  somewhat further north and west, totals approached 15 inches.

With my call of 4-7 inches with an emphasis on “7 most likely”, my forecast fell short.  So what happened?

Official QPF measured at the airport yesterday was 1.06 water, somewhat higher than the 0.87 predicted by the NAM and higher than the GFS. But overall the models did well on QPF. (The actual snow total for just Wednesday was 6.7 inches at PHL airport, according to the NWS.)

My emphasis on solar insolation through clouds lead my forecast astray.  Had it been January, I would have predicted 8-10, which I mentioned in several posts.  So I learned yesterday that heavy snowfall rates trump solar effects, even in late March.

While the models did well on QPF, they did less well on wind. That was lucky for our region.  Temperatures were predicted well.

Mesoscale banding set up northwest of the city and snowfall was heavier in those areas.

An interesting snowstorm, with some aspects forecast correctly and others not.

On the plus side—

Interestingly, the Kuchera algorithm NAM snow totals and axis from last night was probably the most accurate!

What was off on the forecast— 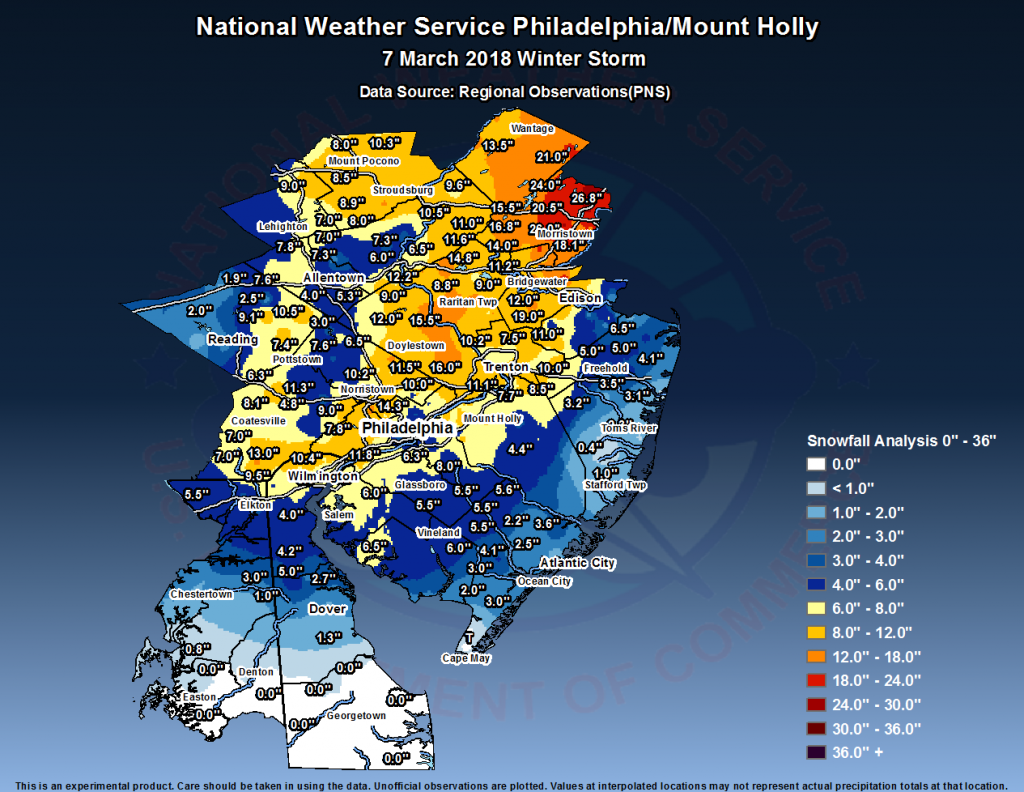 The snow totals exceeded everyone’s expectations, including my own.   So what happened?

I can only speak for myself— I was very reluctant to predict snow totals based only on the raw model numbers for a storm in March.  Indeed, I felt I over-estimated last night when I said 2-4 inches and reneged this morning.

But if I had gone by the raw model numbers, the forecast would have been more on target.   So I can’t say the models got it wrong, except for perhaps surface temperatures, which showed to be colder than forecast. They apparently didn’t get the ‘dynamic cooling’ factored in at the surface.

Indeed, as said in my blog post yesterday, if this had been  a storm in January, I would have predicted 7+ inches.   But, I felt that warm surface temperatures and radiant energy through clouds would severely reduce accumulations and over-ride the raw numbers.

But the raw model numbers (at least based on the NAM FOUS) had enough QPF and low enough temperatures to account for what we have received.   So the models did well, based on my usual criteria.  I just didn’t trust it explicitly for the forecast.

I use the NAM FOUS data, an odd, tabular set of numbers that often provides everything I need for a good snow forecast; I rarely use the preconfigured snow totals of some of the model outputs.

BTW, the NAM from this afternoon shows snow ending shortly after 7PM, although current radar would suggest otherwise.   We’ll see.


These posts are auto-tooted on Mastadon.