For M1 Macs, I have be successful by making a copy of Terminal and using it in Rosetta mode. I hope to have more info on this at a future time.

02-10-22 Updated to work with Monterey 12.2 Changes are highlighted below. Also works on Big Sur. Have not tested on Apple Silicon M1 or M2

12-24-21: Wesley Ebisuzaki of NOAA has updated his README file at his WGRIB2 PAGE with valuable hints and info

09-27-21: I can confirm that the information below works for wgrib2 v 3.02 on Mac OS X Monterey and Big Sur (Intel). I have not had the opportunity to try to install on an M1 Mac, but it looks like HomeBrew has an updated version of gcc that works on an M1.

All files can be found at https://www.ftp.cpc.ncep.noaa.gov/wd51we/wgrib2/

While there are several quick online guides for compiling and installing on Linux and Windows machines, I found that the online instructions for installing and compiling wgrib2  on Mac OS X were good, but not good enough for me to be successful.

It has all the links on the subject, including installation instructions (but not enough detail for a Mac install.)

Since wgrib2 is dependent upon your Mac’s directory structure and other specific software dependencies, it must be compiled on and for your specific Mac.   I’ve had little success in transferring the compiled program between Macs.

Over many months and prior to posting these instructions, I ran into compilation errors repeatedly when.   I could find little help online and only a very limited number of online articles specific to Mac installation.  I was just about ready to give up when I finally figured out ‘the tricks’ needed for it to compile on Mac OS X 10.14.6.  These are included in the instructional that follows.   I’m posting this instructional so that others will not be daunted by the process of installing wgrib2 on their Mac.

There are two main online instruction sources for compiling and installing wgrib2 on Mac OS X and I am extremely grateful to the authors for their posts:

How to install wgrib2 in OSX

Individually these two links provided the essential flow of installation and compilation of wgrib2 sequence on the Mac.

However, their instructions only got me part way there. I still had compilation errors.

Much of what I’m going to review is from the first link above (“How to install wgrib2 on OSX  “Bovine Aerospace”) but there will be important changes that I found essential for the install to work.  In this instructional, I will use mostly Mac-like approaches.  Terminal commands like chmod, etc won’t be used.

The latest versions of wgrib2 code from NOAA and  README documents are available from this web site:

You can also use ftp to download the latest version:

You’ll likely find the wgrib2.tgz.v3.1x  package in your Downloads folder.

You should see a confirmation showing where it’s installed

Check if gcc is installed—

Next, check if gcc ( a C compiler) has been installed on your Mac in the past—

To do so, enter this command in Terminal and press return:

If it’s installed, it will respond with the directory it’s in:

If it doesn’t show /usr/local/bin/gcc , it’s not installed.  We’ll use HomeBrew package installer to install gcc.

gcc can be installed with a “package installer” called HomeBrew.  HomeBrew will also need to install other things, so now’s the time to download and install HomeBrew.

Go to https://brew.sh/ and follow the relatively simple instructions to install HomeBrew by pasting a command from it’s website home page into your Terminal program.Copy the command from the HomeBrew page.

Then, paste it into Terminal.  HomeBrew will install.

Go back into Terminal and issue the following command to install gcc:

gcc should then be installed.

Check to see where it’s installed,  Enter the following command

and terminal should show this, if gcc is installed:

When using HomeBrew to install gcc, another necessary compiler, gfortran will be installed along with it as well.

Let’s check to see if another compiler, gfortran, is installed by entering this in Terminal and pressing return.

and if it’s installed, Terminal will reply:

Check the versions in your directory

One more thing.  Let’s check the exact name of  the installed versions in your /usr/local/bin directory:

Enter the path to your bin folder:

You should see the alias versions of gcc and gfortran that were installed in the local bin directory:

In my installation it was gcc-9 and gfortran-9.  (update: latest version is gcc-12)

Update 02-10-2022 .  When updating to gcc-12 using Monterey and homebrew, I needed to have both the “gcc-12” alias and “gcc” aliases in the bin folder for it to compile without errors.

After installing or upgrading to gcc-12 using Homebrew,  go to the Finder> Go menu >Go to Folder…..

Do the same with gfortran-12. 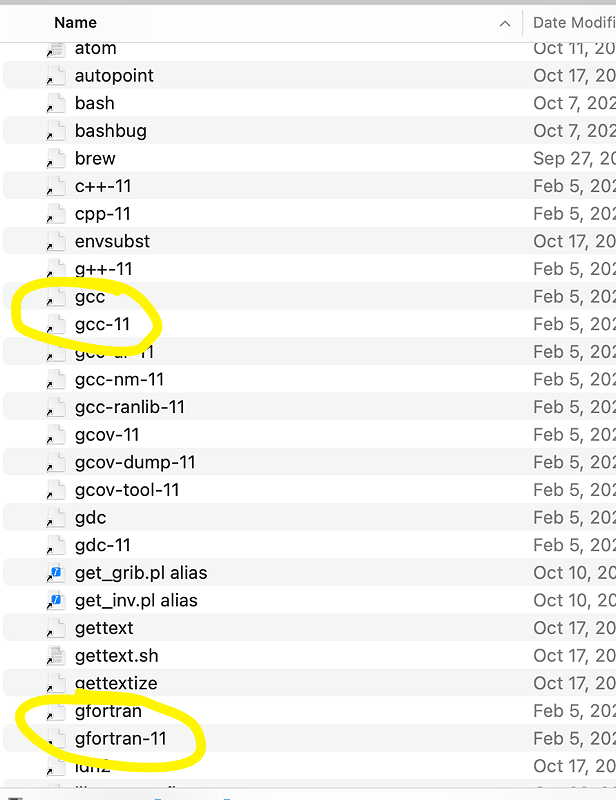 As you can see with the previous picture, both aliases need to be in the “bin” folder.    (update: this graphic shows gcc-11.  Current version should show gcc-12.  So you should have the following aliases:   gcc-12  and   gcc  gfortran-12   and   gfortran in this bin folder)

Use Terminal commands to determine the version # that’s installed on your computer:

Next, we’re going to deal with the wgrib2.tgz package that was downloaded earlier and is likely in your Downloads folder.

Make a copy of the wgrib2.tgz package and move it to your desktop.

(We’re going to do the work initially on the Desktop, although advanced users might want to put it directly in /usr/local/, but let’s keep it simple.

Open the Terminal program. At the prompt, type these two commands

This will “untar”  (“unzip” if you’re used to Windows and Mac) the install package.

When untarred, you should see a new folder named grib2 on your Desktop.

In the Finder, open the grib2 folder:  You will see all the libraries and scripts needed to compile and install wgrib2.

The  arrows point to key files that we will be modifying to get this to install.  Let’s first work on the makefile  (as shown with the arrow.)

Using a text editor, open the file called makefile in this folder.  You can use TextEdit or any simple text editor.  (I’m using a program called Atom which shows the line numbers.)

This makefile needs to edited.  See the areas shown below: 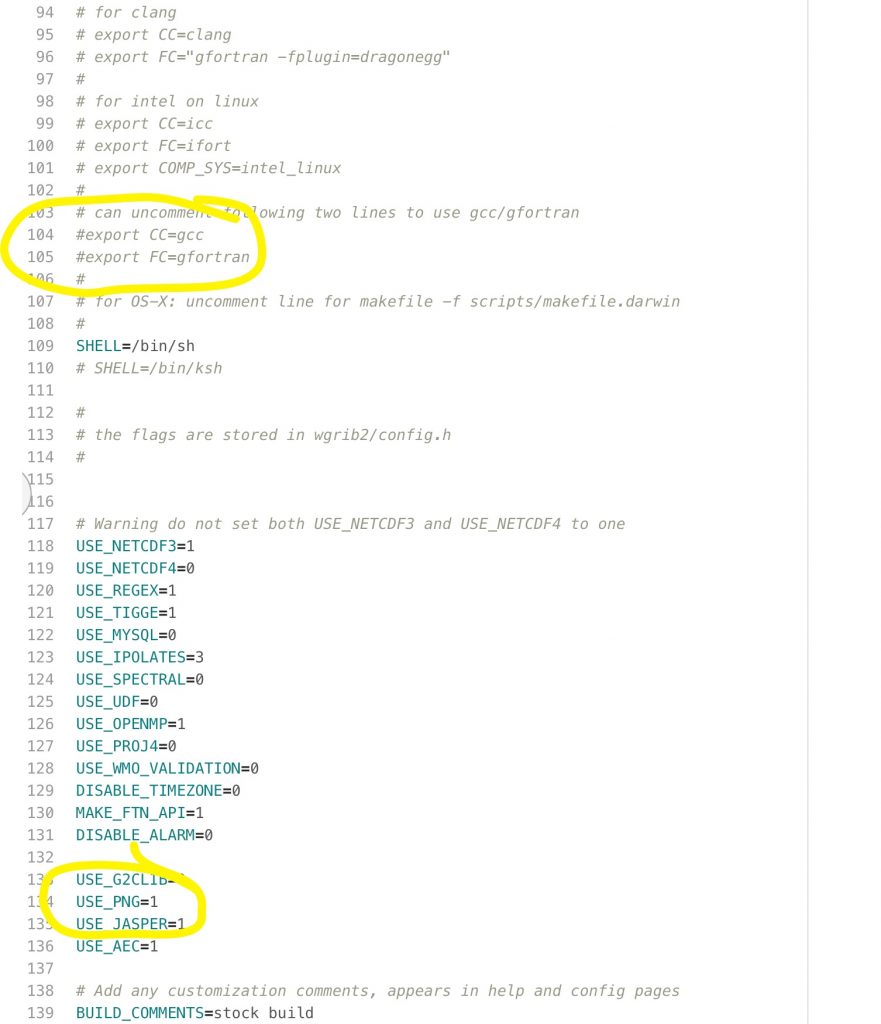 The following changes need to be made:

Find the lines shown  (lines 104 and 105)  and uncomment the lines  (delete the preceding hashtag). You will  change them from this

to this using your TextEditor. Be certain to add the version of gcc and gfortran to the lines below as shown.   It should look like this:

Notice that I am including the version number (gcc-9)   (gfortran-9) that we saw in your usr/local/bin directory in the earlier part of these instructions.   (If your version is different, use the one that you have, e.g. “gcc-12” and “gfortran-12”)

Additionally, I found that we need to edit another parameter in the makefile, not mentioned in other online tutorials for the Mac.  The text is shown in the above graphic of the opened makefile  (line 134)

Edit this using your TextEditor and change this

There are two more changes we need to make.

and just uncomment it (remove the hashtag) so that it looks like this:

to the following:  (Simply add a hashtag, as  shown in orange)

We’ve made the necessary changes in the makefile.  Select Save from your TextEditor menu to save the changes.

Now, we need to edit a compilation library that’s in the same folder as the the makefile we just worked on.   The file is:

We’re going to do it initially with Terminal to untar the tarball.

You might want to quit and then to restart Terminal again to make sure you’re in the correct directory.  After restart, enter:

We can make the changes we need to make with the Terminal text editor, nano, but I think it’s easier for Mac users to just work with the file. So quit Terminal.  (In Terminal it would cd ~/Desktop/grib2/libpng-1.2.59/scripts but we’re doing this the Mac way.)

Go to the Finder Desktop and find the new folder that was created inside the grib2 folder called libpng-1.2.59  ( Desktop/grib2/libpng-1.2.59) 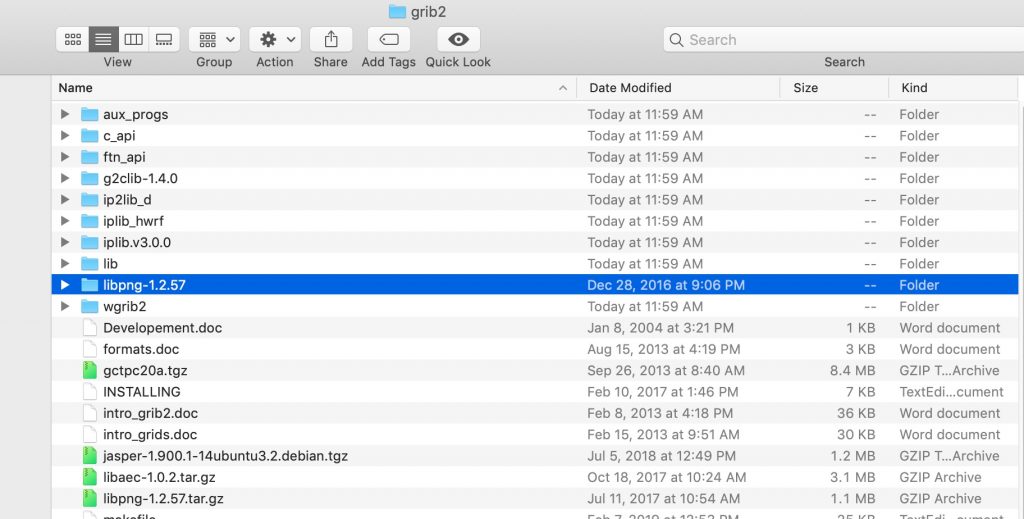 Open that folder (libpng-1.2.59)  to find the scripts folder

Inside the scripts folder is a file called makefile.darwin: 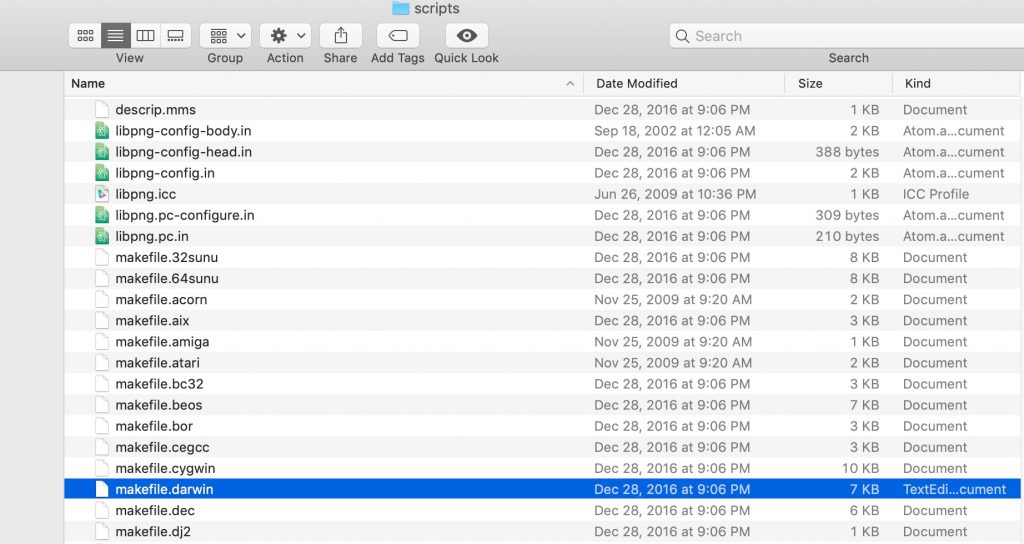 Let’s edit this makefile.darwin with TextEditor.

Using the search in TextEditor, find the line CC=cc 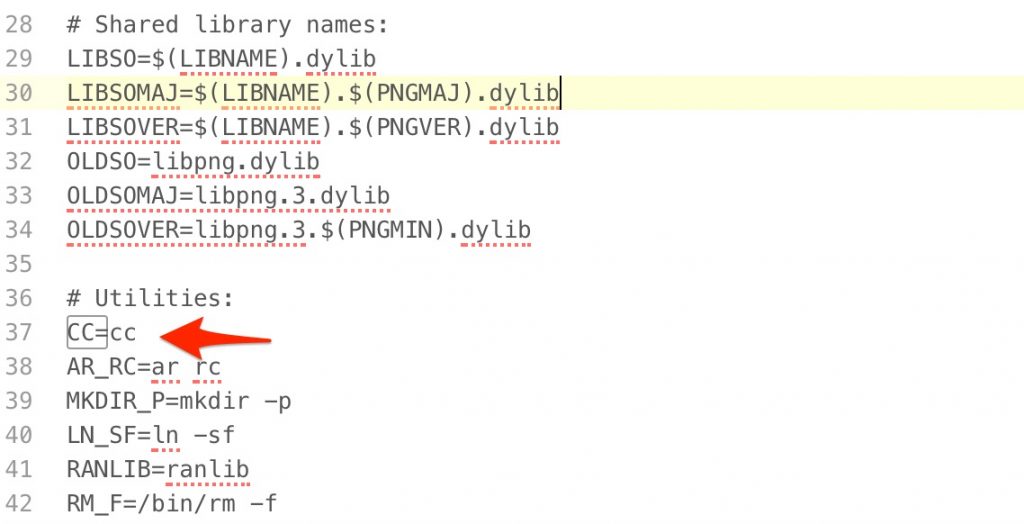 Save this change with your TextEditor save command.

Now we’re going to re-tar this file back to a compressed file.

Start Terminal.  At the prompt, enter:

You will see the following:

Type  y  to overwrite the file.

Close the grib2 folder on your Desktop.

Select the folder to highlight it, then choose copy from the Edit Menu to copy the grib2 folder.

Using the Finder, copy the grib2 folder (/Deskop/grib2)  that we’ve been editing on the Desktop, and paste it into your local folder (/usr/local).

Your local folder should look like this after pasting— 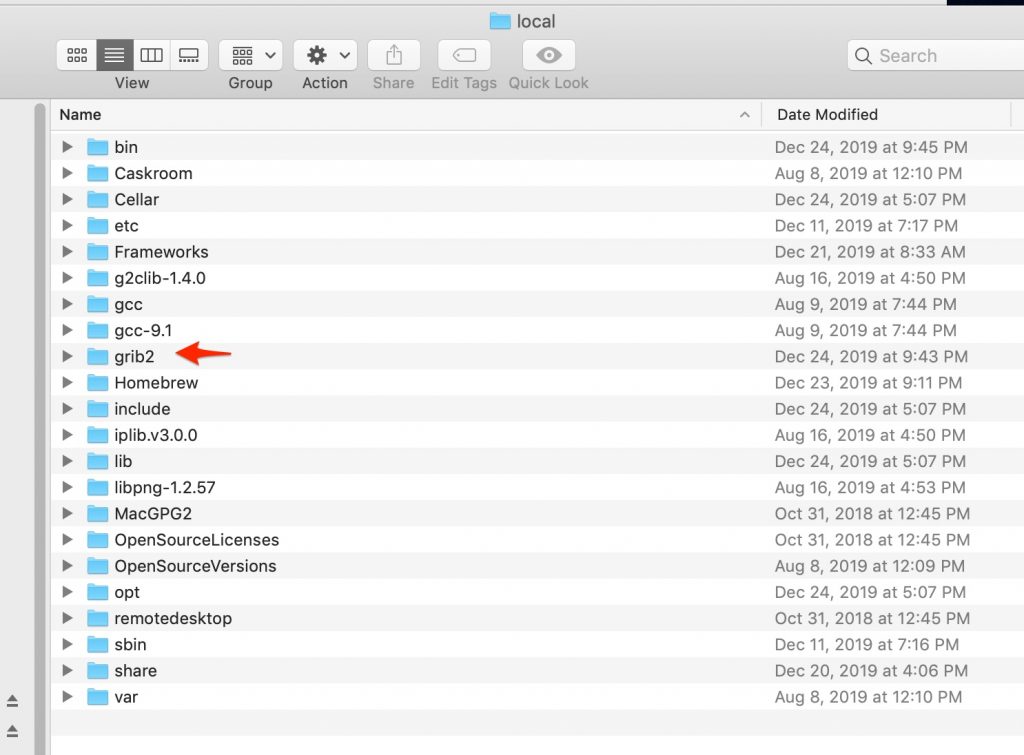 Next we are going to alter the permissions of this folder and its contents.  We could do this quicker with Terminal and the chmod command, but let’s do it the Mac way.

Select the grib2 folder.  Right click to Get Info. In the Get Info window: 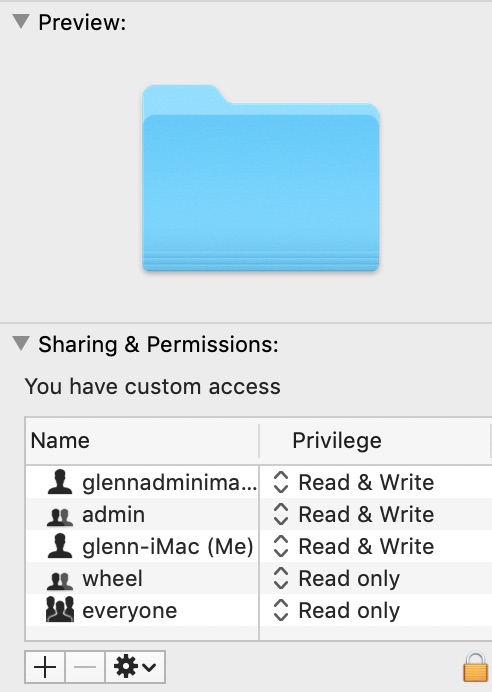 Unlock the padlock, then using the plus symbol, add the administrator and make it Read & Write.

Using the gearwheel, select “apply to enclosed items” from the dropdown.   Close the padlock to save.

We’ve done the changes needed. Congratulations.   In doing it this way, you should  still have copy of the grib2 folder on your Desktop with all of the changes we’ve made.   We can use this again and copy it to the local folder if we find it doesn’t compile right.

Ok, the now the moment we’ve been waiting for.

Remember, you need to be an Administrator of your computer for this to work.

Enter superuser mode using the su command and your username as an administrator.  You will be prompted to enter your password.

Now use the “make” command as a superuser.

If everything is going well, you should see Terminal display the progress of the compilation.  It may take several minutes.

If no errors occur at the end, you did it!

To make wgrib2 easier to use (while you’re still in the grib2 directory), enter:

(Update: If the above ln -s  command gives an error, try this command below ):

You don’t need to remain as an Administrator to use wgrib2.

Following installation, you can check that wgrib2 is installed by the terminal command—

To see wgrib2 in action, use the terminal command on any .grib2 file you have to see its message contents—

Questions or comments?    Use the Feedback form to email me.